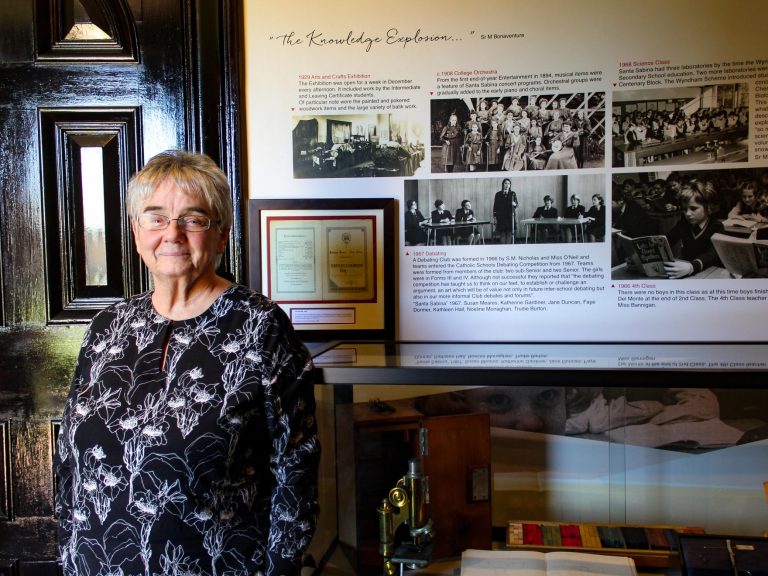 Jane Sulis is a true and lifelong exemplar of the Dominican pillars of prayer, study, community and service. It’s hard to imagine a more dedicated and completely immersed member of the Santa Sabina family.

As she proudly says, she was taught by Dominican Sisters ‘all the way through’. They had ‘an enormous influence’ on her intellectual growth.

And what intellectual growth that was. Sr Diana Woods OP, Ms Sulis’s College Principal, taught her Latin and encouraged her award-winning debating. At only 17 Ms Sulis was awarded her ATCL (Associate Teaching Diploma in Speech and Drama from Trinity College London), allowing her to support herself through university by teaching speech and drama, known then as elocution.

At school she was a noted debater, scholar, actor, writer, speaker, yearbook editor and leader. ‘Very studious and a good, solid debater’, says fellow debater, ex-student Trudie Rogers (née Burton, Class of 1968), In her final year, 1968, Jane Duncan, as she was then, was College Vice-Captain and awarded the General Proficiency Prize. In earlier years there were many other prizes and leadership positions.

After gaining her Bachelor of Arts degree with Honours in English Literature and later her Diploma of Education, both from the University of Sydney, Ms Sulis taught here in a casual role as a relief teacher of English, Primary classes, Religious Education and there were even three weeks teaching Mathematics. Her main work, though, was raising four sons who started pre-school already literate and numerate, thanks to their mother’s love of learning and teaching.

In the years before her 2002 full-time appointment to the Santa Sabina staff as Director of Social Justice Education, Ms Sulis taught at Our Lady of Fatima Catholic Primary School Kingsgrove. After a stint teaching in Del Monte, she is currently Coordinator of Outreach, Religious Education teacher and coordinator of our co-curricular debating program. As Coordinator of Outreach Ms Sulis manages the students’ service learning activities taking place across Sydney at places including St Vincent de Paul Woolloomooloo, St Joachim’s Lidcombe and Goondee Nursing Home. Another activity she leads is the creation and distribution of Christmas hampers.

Up until the end of 2017 Ms Sulis was also involved in the debating and public speaking program of St Patrick’s College, Strathfield, where she ‘turned a ragtag bunch of ambitious boys into remarkable and unquestionable young men’ according to their 2017 Debating Captain, Mitchell Dunne (Lucerna Vol 22, Issue 2 2017, the journal of St Patrick’s College).

Such has been her influence in Sydney’s debating scene, the Catholic Schools Debating Association has established an award in her name: the Jane Sulis Shield, not for the winning team, but for the best and fairest performance by a school.

Perhaps unsurprisingly, Jane Sulis is disdainful of television. ‘I don’t watch it’, she says.

Instead, she is a fan of ABC radio, listening in particular to Richard Aedy on Radio National and music on Classic FM. She’s a great reader and also spends time in her garden. Then there’s her lifelong pastime of connecting to people and charities, receiving donated goods and delivering them to where they are most needed.

Jane Sulis’s heart and soul are embedded in Santa, thanks to the abiding influence of our Sisters whom she often joins in evening prayer. ‘I admire the nuns so much. They never stop learning. Between them they have so many PhDs. Even in retirement they’re off to courses and lectures, they’re way ahead of the pack’.

Teachers such as Jane Sulis are honouring the mission of the generations of Dominicans in Australia, to provide an exceptional education which inspires and enlivens.

Jane Sulis is pictured in the Mother Bertrand Walsh Museum, near her schoolgirl self as a 1967 debater.