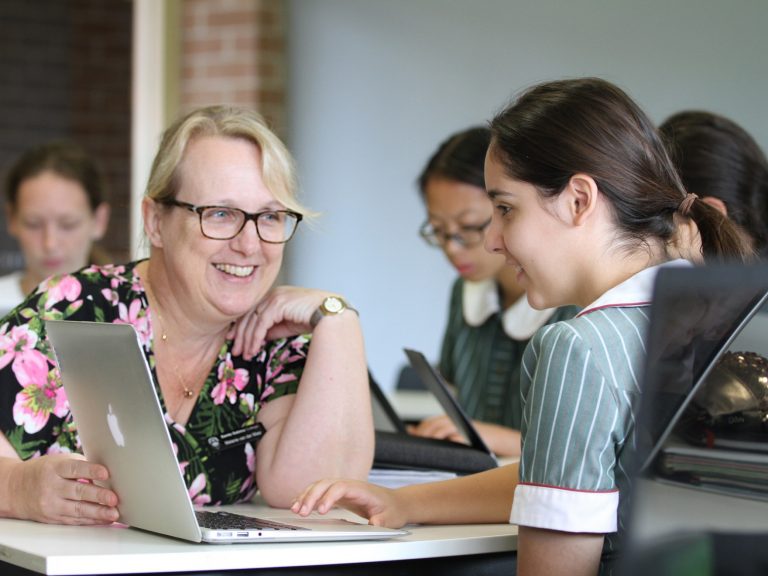 Mrs Melanie van der Meer, our Head of Mission and Identity, has been teaching at Santa Sabina since the year 2000. While English teaching has been her main role here, she is also a teacher of Religious Education and History. She sees her pastoral care trajectory – formerly Acting Head of Pastoral Care and Head of House – as vital in informing the way forward in her new position.

‘My role is to ensure that the interconnection between our Dominican heritage and our broader Catholicism is understood by all members of our community, including those from other faiths’, she says.

On a day to day basis Mrs van der Meer arranges Liturgies, retreats, immersions, the social justice program and staff formation. Through these religious services and programs she continues a 125-year-old tradition of instilling within all members of the Santa Sabina community a strong understanding of the key elements of the Catholic identity.

‘For years at Santa Sabina we have sought to embrace and include everyone in our Catholicism which influences the way we live our lives every day.’

Mrs van der Meer works in conjunction with the Religious Education Coordinators on both the Primary Years and Secondary campuses. She networks widely with a number of priests in the Strathfield area and with Sydney Catholic Schools.

‘We are part of the wider Catholic community in Sydney and we live out our Catholicism in so many ways – from the care with which we treat our students, through the immersions and other opportunities we offer students, to the very specific things we teach in RE classes.’

A fact of life at Santa is the large number of students who choose to pursue the rigorous HSC subject, Studies of Religion, such is the positive impact of their RE classes in Years 7 to 10.

Optional Thursday Mass before school is an important part of Mrs van der Meer’s week and she loves the additional occasions when prayer and reflection are made available to the students and staff, such as Christian meditation and the Dadirri prayer space.

Beyond the classroom and the Chapel, Ms van der Meer enjoys spending time with her husband and three children, as an actively involved school parent at St Patrick’s College Strathfield.