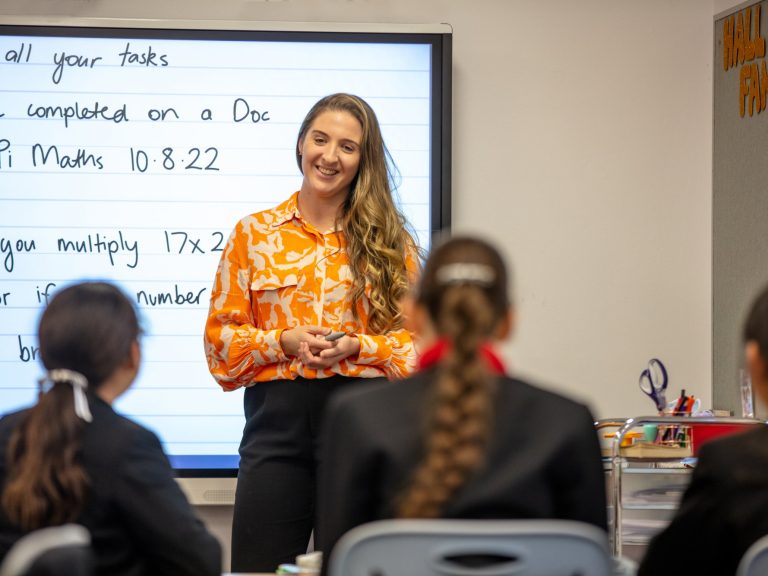 Term 3 was Dance season and barely a weekend went by without news of a swag of eisteddfod medals for Santa Sabina students. Behind our Dance Program success is Bryony Williams, Dance Coordinator and Year 5 teacher.

‘Miss Bryony’ has been dancing since she was ‘three or four’ and teaching dance since she was 17. An ex-student (Class of 2012), Bryony never really left the College as she commenced coaching in our dance program while studying for the HSC and continued during her professional studies and career as a performer in musical theatre. When the position of Dance Coordinator became vacant, Bryony was the natural successor. She has responded to community demand and built the program and its reputation despite the lockdowns of COVID since she was appointed.

Bryony’s career in the performing arts is in her genes. Her grandmother was greatly influential although she ironically believes that Tap is the only style of dance worthwhile. At Christmas and other important family occasions, Bryony’s family danced and sang around the piano and there was no option but to get involved and take on dancing as the number one extracurricular growing up. But she hasn’t looked back. Dance has taken Bryony from university studies to involvement in local amateur musical theatre to performance tours overseas. Bryony, however, came to the realisation that she feels more satisfaction from watching her students perform than from performing herself.

‘I feel more passion and more of a thrill watching my students and thinking I taught them that and we did that together’, she explains.

So Bryony augmented her coaching by studying primary teaching at the Australian Catholic University. In 2022 Bryony starts her days before school running the Dance Program which involves 115 students, four coaches and one assistant coach (a Year 12 student – an echo of Bryony’s own start in the dance coaching scene). Although Ballet is considered absolutely fundamental; Hip Hop, Jazz, Tap and Contemporary are the dance styles of today. The students range from Year 1 to Year 12 and they appreciate the added benefit of interacting together, despite the difference in ages.

‘Our dance teams have done really well thanks to their strong commitment to practice and their great coaches’, Bryony says. There is magic and creativity in dance but our dancers also learn self-discipline, respect for others, punctuality and perseverance.

Once the school day begins, Bryony inhabits a bright and airy upstairs classroom in Gioia House teaching 23 Year 5 students. The life skills learnt in dance are brought by Bryony into the Year 5 classroom where high expectations are the norm, curiosity is nurtured and joy abounds. Even when difficult maths concepts are on the timetable! In both Bryony’s work settings, positive energy and good wellbeing are evident.

On weekends and holidays, when it’s not the competition season of Term 3 (Saturdays AND Sundays), Bryony enjoys spending time with her family and friends, going to the theatre and travelling. And her favourite dance style for herself right now? Jazz. She also follows closely the US dance scene and takes inspiration from it – a country where dance has immense popularity and innovative routines are every day.

Overriding all this is the sense of balance achieved thanks to the physical demands of being a dancer.

‘As both a student and teacher I value physical activity so much for all. It truly balanced me as a student and continues now as an adult as well. Whether it be dancing, Volleyball or Netball, maintaining a physical activity truly teaches life lessons which stay with people for life (including mine). I encourage all my students to do the same throughout their entire schooling, including Year 12, again, as I did.’