Holding the key to coral rebirth 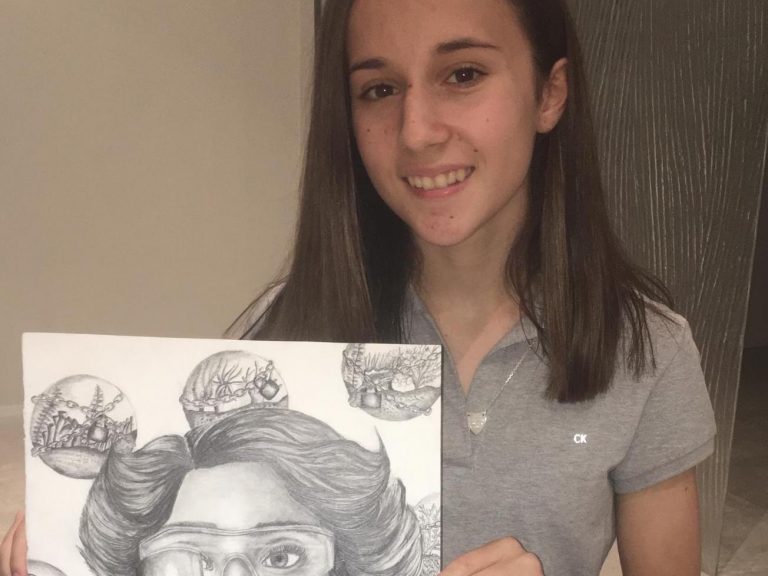 Congratulations Maree Sialepis of Year 9 who has won second place in an international competition and was the only Australian to become a finalist. The Science Without Borders Challenge engages students to promote the need to preserve, protect, and restore the world’s oceans and aquatic resources.

Maree’s compelling artwork, Holding the Key to Coral Rebirth, was a winning response to the 2020 theme: ‘Take Action: Conserve Coral Reefs’. Worldwide, 700 students used their artistic talents to create a piece of art that illustrates one or more of the different actions that can be taken to preserve coral reefs.

Maree said, ‘The only way I could make my artwork “speak for itself” was by highlighting and emphasising the significance of science in creating the process of lab-induced coral growth.’

Maree’s process weas influenced by her recent experiences in Visual Arts lessons, through the exploration of monochromatic tone and dimension.

‘This inspired me to present to the audience that our reefs, although not visually black and white, are darkly suffering’, she said.

‘The more I created my artwork, the more I grew my passion in creating awareness and advocacy for science’.

Maree used 2B, 5B and 7B lead pencils to create a monotone effect representing the reality of coral reef destruction. In her artist’s statement she said: The composition’s background depicts dull, lifeless monochromatic reefs captured in the sea bubbles and choked by chains. The varying tones of lead pencil create an exaggerated, colourless depiction of the possible fate of the coral reefs without intervention. In the foreground, the power of scientific intervention is indicated through the subject of the scientist. The scientist’s facial expression and eye contact with the test tube allows the audience to identify the scientist’s amazement and success in unlocking the future of coral reefs through laboratory growth and nursing. The depiction of a marine biologist reaching for a key signifies the power, success and solutions scientists are working towards achieving in order to take action to conserve reefs worldwide.

Maree’s work sends a powerful message through the word choice to emphasise how the power of science can revolutionise coral growth.