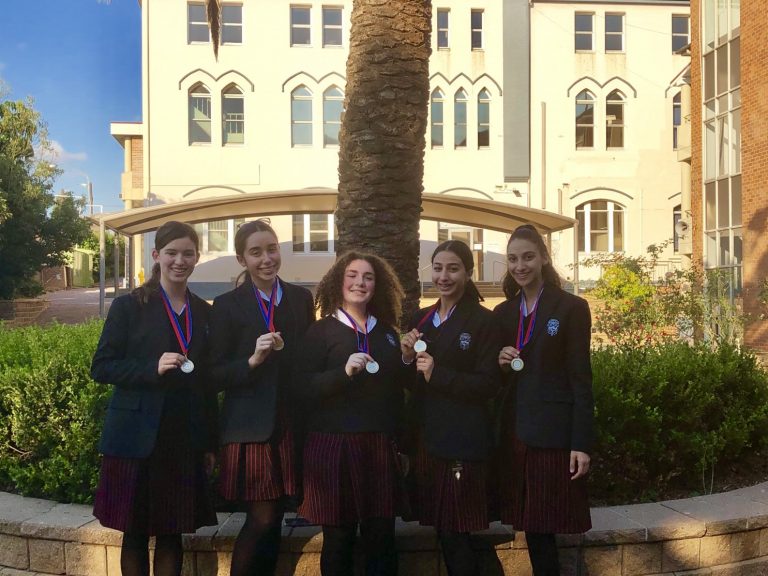 The team of five Year 10 and 11 girls was a last-minute acceptance from the competition organisers as the interest from NSW schools had been immediate and unprecedented, resulting in a waiting list to compete. After another school pulled out during the 8-week preparation period, Santa Sabina was left with just 2.5 weeks to prepare.

Despite this disadvantage, the students, Clara Elias, Rachel Frecker, Sarah George, Solange Shina and Mia Stravropoulos, quickly learnt the basics of ethical theory under the mentorship of Philosophy/Studies of Religion teacher Andrew Costantino. On 18 May at Rosebank College they completed three heats before making it into the final.

On stage against St Vincent’s College and in front of career philosophers and academics, the Santa girls argued an environmental ethics case on de-extinction.

According to Andrew Costantino the girls won using rational and ordered thinking which satisfied the award criteria of clear, concise and respectful discourse.

“They were systematic in formulating their arguments and considered alternative points of view, demonstrating their capacity to think critically”, he said.

Team member Solange Shina said participating in the Olympiad was different to an average debate or public speaking tournament.

“We had to focus on discussion with the other team”, she said.

“This meant we could explore arguments for the affirmative or opposition and were encouraged to consider alternate points of view. I learnt a lot about ethics and how to construct an argument in terms of approaches to ethical dilemmas, I listened to various opinions from my peers that helped me to re-evaluate inconsistencies within my beliefs.”

The students believe the study of philosophy links well with their Catholic identity as it encourages critical thinking and evaluation while considering fundamental questions regarding human nature. It forces one to consider what they value, why they value and then what they ought to do. Translating faith into action is at the heart of a Dominican education.

According to another of the gold medallists, Rachel Frecker, the study of philosophy is highly valuable. “It challenges us to evaluate what we know and believe and to consider fundamental questions about our world that have unclear answers, but are so useful”.

While philosophy is taught at Santa only to the students of the IBDP and in the enrichment program, all Santa students take Studies of Religion or Studies in Catholic Thought. These classes require them to ask questions of value: of who we are, of what we stand for. Students are guided to reflect on what a good life looks like, how to be good in the world and the construction of the whole person.

Santa Sabina will also be participating in the inaugural Sydney Middle Years Ethics Olympiad on 30 November.