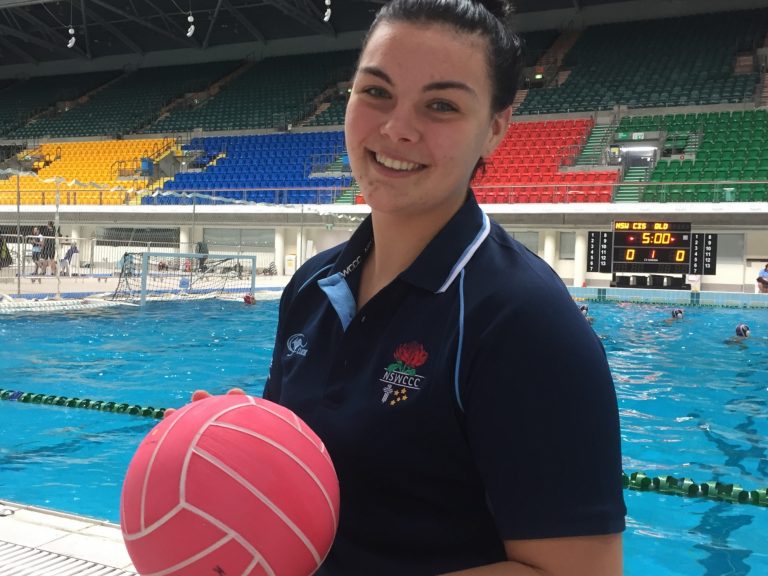 Santa Sabina College HSC student Megan Miranda has just been selected to play Water Polo for Australia in Japan this month. In the ‘Born 2002’ Australian Water Polo squad, Megan will head to Japan for training and the tournament as soon as she finishes her HSC exams this month. After Japan, Megan will compete against New Zealand for the Australian All Schools Water Polo team in December.

We asked Megan about her selection into the Australian Water Polo squad:

What does it mean to you to have been selected?
My selection into this squad means a great deal to me. It feels as though everything is finally beginning to pay off and my hard work is being recognised. I’ve been previously held back from opportunities due to injuries and to be named as a part of this squad alongside girls that I’ve grown up playing and training with/against proves that with hard work and determination your goals can be achieved.

Seeing my name on the list did give me a great sense of relief. However, I also know that from now on a lot of effort and persistence in training and keeping my body fit and healthy is to come!

How long have you been playing Water Polo?
I grew up playing water polo, both of my parents and the majority of my aunties and uncles play. My mum always tells me a story about how one day when her team was short on players they put a cap on my head, bubble on my back and threw me in the water. Although a little extreme for a three-year-old at the time I haven’t really stopped since. However, going off records my first proper season was in 2007, so I’ve been playing for around 12 years now.

How much training will you be doing while preparing for your HSC exams?
As our summer season is approaching, both club NSW Institute of Sport training pulls back and club national league and age group training begins. All together I’m scheduled for approximately 13.5 hours of training per week in addition to two games per week. Even though it is still a lot and I am still in rehab for an injury at the moment there are competitions as close as three days after my last exam so it’s important that I keep up! Both NSWIS and my club are of course understanding though in that the day of an exam we can have that morning off and even potentially the night before!

What are your plans when you leave school?
When I leave school I initially planned to study in America beginning this January however after more consideration I felt as though I had more to achieve here and living in another country as a 17-year-old is a little bit daring. I’ve decided that next year I’m going to stay in Australia and work where I can but more so primarily to focus on my water polo in hope of making the team for the 2020 Junior World Championships. From there I may get more college offers however, if not, I plan to then start a uni degree (after deferring as though it was a gap year).