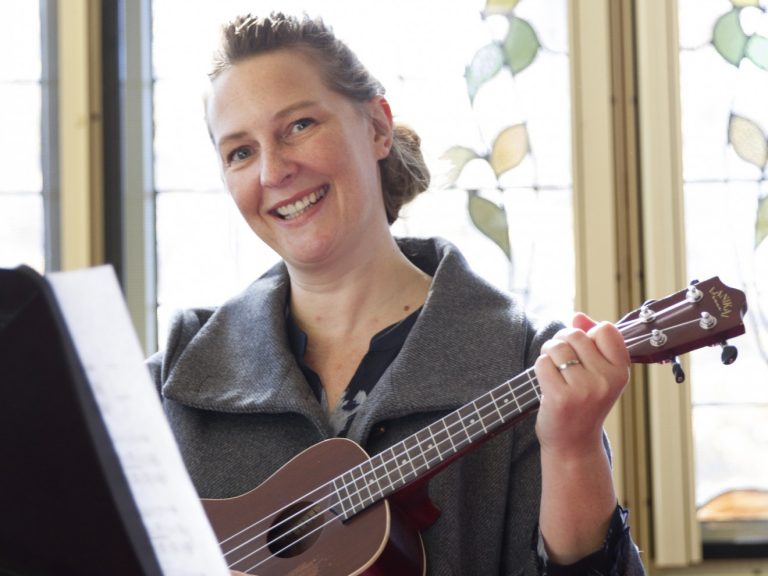 Music…gives a soul to the universe, wings to the mind, flight to the imagination, a charm to sadness, and life to everything.
Plato

Promoting the undeniable connection between music and wellbeing is the passionate pastime of Music Teacher Deborah Cunneen who joined the Santa Sabina College staff in 2018.

‘The joy of music making and the sense of community you build through being involved is such a boost to mental health reserves’, she says.

As Head of House Mrs Cunneen works to build resilience in Kurrawa students. She also teaches music to Years 7, 8, 9 and 11. Combining her two passions of music and pastoral care in Strathfield, she is a long way from where she grew up.

Originally a Londoner, Mrs Cunneen was trained at the London College of Music in classical flute and singing. She began her adult life as a musical performer in ensembles, mostly playing chamber music.

But after being brought to Australia ‘as a souvenir’ by a visiting Aussie – now her husband – Mrs Cunneen decided to try her hand at teaching in order to continue to have music in her life, every single day. She launched into a teaching degree at the University of New England and hasn’t looked back.

Mrs Cunneen came to Santa Sabina after 10 years teaching in the Music Department at International Grammar School. Santa already had many connections for her including being her mother-in-law’s alma mater. Mrs Cunneen senior spent her Kindergarten year in Holyrood so this is a family homecoming of sorts – Mrs Cunneen junior spends every day there. And the Cunneen family’s next generation is at Santa too – Deborah Cunneen’s daughter is a student on our Primary campus.

‘Santa’s reputation for musical excellence was definitely a draw card and a place where I can continue to flourish’, she says of her decision to move here.

‘The girls I teach are divine and I love my classes. The Music Department has a real sense of family. It’s an exciting time of growth as we build on Karen Carey’s incredible vision’.

At our 2018 Cantilena concert in the City Recital Hall Mrs Cunneen conducted the choir and played her flute with our Symphony Orchestra. Her infectious energy and ready smile were radiating from the stage. But we didn’t see her with her signature on-campus accessory – her ukulele, easily transportable and indispensable in her music classes.

In future years we might also see Mrs Cunneen involved in the next Santa musical theatre production, and she will have another degree under her belt to benefit our girls – she is currently studying psychology.