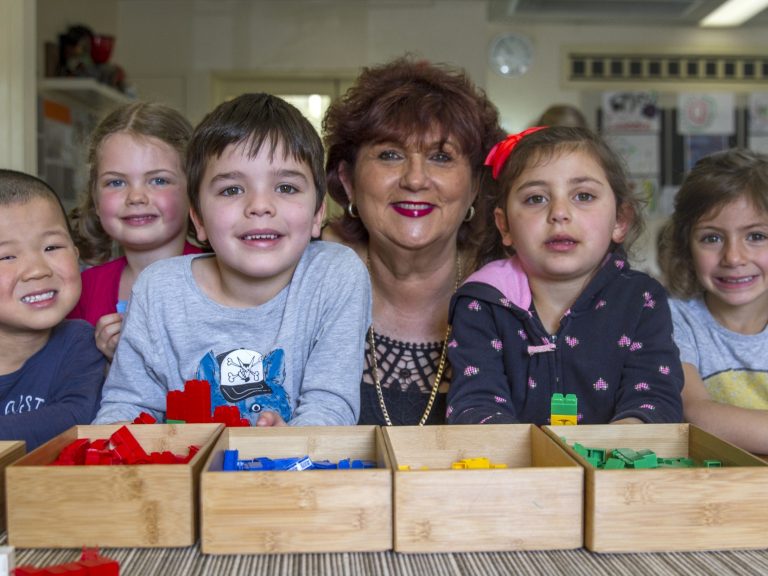 Frances Windon is the resident grandmother for our littlest girls and boys – the students of Mary Bailey House, our Early Education Centre within the Santa Sabina community.

Frances (the children call her this, not Mrs Windon) has been on the staff at Santa Sabina for quite a while – since 2002. She works as Mary Bailey House and OOSH Administrator and has also added stints elsewhere in the College at times – as Assistant in the Visual Arts Department on the senior campus and as occasional Receptionist at Del Monte.

But her association with us is stronger and longer than that. It dates back 35 years, since the first of her four children enrolled at Del Monte. Her three sons and one daughter all attended Santa, from start to finish.

When her youngest, a son, was nearing the end of his time at Del Monte and Frances realised the importance of the Dominican ethos to her outlook, she sought a job here and so her place in our Dominican family was able to continue. She has worked in Mary Bailey House for nearly 20 years.

Frances looks after the accounts and other administrative tasks and also spends time with the children at rest time. She has a Certificate 3 in childcare.

Before Santa, Frances worked in theatre management and sales at Sydney’s illustrious companies and theatres including Opera Australia, the Theatre Royal and the Capitol Theatre. She insists she always worked behind the scenes, but her theatrical lashings of gold jewellery, bright nail polish and rich, sonorous vowels are more than hints of a thespian side, not lost on the MBH children.

‘I love the honesty of the children. I have been told that they don’t like my clothes, some don’t like me, some love and some dislike my bright nails and others want to know why I always wear red lipstick’, she says.

‘One little girl asked my age and I said you guess – 100 was her answer. Having two grandchildren of my own I just laugh and never get offended.’

Frances enjoys interacting with parents too and already knows a great many of them as they were school friends of her children who are now sending their own children here for their education.

‘I love how the children emerge from their time at Mary Bailey House very rounded and educated little people’, Frances says.

‘I just find it fascinating that they know so much of what’s going on in the world – they know about the environment and sustainability. They understand Aboriginal reconciliation. They’re so involved with everything that’s happening, thanks to the wonderful teaching happening in Mary Baily House.’

As a committed Dominican and long-standing member of the Santa Sabina family, Frances represents generations of connectedness starting with the Sisters who taught her children through to the future generations of Santa students. As MBH Director Jackie Baxter says, ‘Frances is a College gem’.