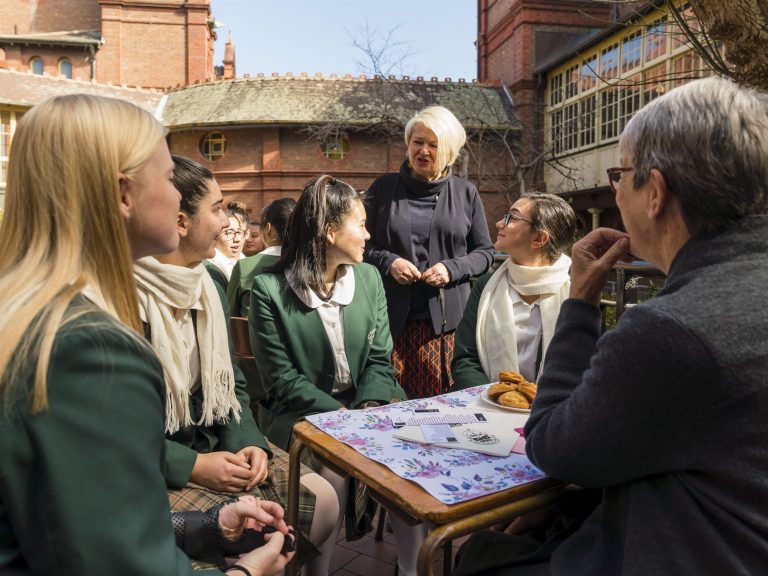 Last week we had a very special blessing in the chapel for the two icons of St Dominic and St Catherine. These icons were commissioned as part of our 125th anniversary. Created by the accomplished iconographer, Michael Galovic, these icons are unique to Santa Sabina. While we have many religious paintings, particularly of Dominic, we learned the difference between an icon and a painting. The icon does not attempt to be a life-like, naturalistic painting but an interpretation that is informed by the life of the sacred subject. The icon does not just appeal to the eye but represents a connection to God. This very special blessing was attended by many Dominican Sisters, staff and student leaders.

Tomorrow I’ll be attending the Sydney Archbishop’s Awards for Student Excellence. The ceremony is held at St Mary’s Cathedral and each school in the Sydney Archdiocese is represented by an outstanding Year 12 student. I wish to congratulate Natasha Rego who is this year’s exemplary College representative.

This week is National Child Protection Week and we are launching our new Child Safe handbooks for students. In consultation with students, we have designed two age-appropriate handbooks for students in P-5, and in Years 6-12. While we have very strong child protection policies for staff and regular, ongoing professional development in child protection, this is the first time we have designed a student-specific handbook. Please share and discuss them with your daughters and sons, and continue the conversation with us as well. If you have any questions about the information or processes described in the student handbooks, you can speak to the Heads of School, Mr O’Connor and Mrs Portlock, and the Head of Pastoral Care P-12, Ms McGovern.

Following weeks of preparation, the Primary Years IB Year 5 Exhibition will open tonight at 6:00pm. The overriding theme of the girls’ investigations is ‘Where we are in place and time’, and their central idea is that ‘Exploration leads to Change’. The Exhibition is a culmination of the IB PYP, and reflects the approaches to teaching and learning that characterise the IB. Students inquire, research, collaborate and communicate their original findings, with teachers from across the College acting as mentors. The quality of the exhibition since the commencement of the PYP at Del Monte four years ago is outstanding. I look forward to an exciting exhibition tonight, and thank all of the teachers for their inspiring support of students.

On Saturday, 20 students from Years 7-9 competed in three separate teams in the Tournament of Minds competition. Each team competed in a different strand – The Arts, STEM and Social Sciences – and all presented well-considered and creative solutions to the challenge they selected, and worked towards solutions over the last six weeks. I am pleased to announce that the STEM team has made it through to the regional finals to be held on 15 September. This team comprises Inez Crosby, Molly Hoogland, Rosanna Cartwright, Erin Blanchard, Sienna Ters, Lara Nero and Emily Vellar.

For the NSW state finals of the Science and Engineering Challenge this year, our Year 9 and 10 team qualified and competed on the third and final day at this event at the University of Newcastle last Thursday. Hundreds of schools participate each year from each state. Congratulations to our Santa team who placed 9th overall in NSW and were the highest placed all girls school in NSW.

Meanwhile all of Year 8 are completing their outdoor education program this week at Tallong, and enjoying the early spring weather as they tackle a variety of challenges.

Preethika Mathan (Year 8) flew to Melbourne today as a finalist in a prestigious national writing competition jointly run by Hachette Publishing and John Marsden. Preethika wrote a beautiful piece that advocated for better government funding for families dealing with disability. Preethika spent the day participating in a writer’s workshop, and then the ceremony where she was announced the winner of the non-fiction section. Congratulations Preethika!

This weekend SSC Volleyball students will be competing in the NSW Schools Cup. We wish all those students the best as they prepare for the Australian Volleyball Schools Cup on the Gold Coast in December. Good luck also to Year 6 student Sophia Gerakas who is representing the College skiing in the Australian Snowsports Championships in Mt Buller today.

Our dancers competed in the Catholic Girls Schools Secondary Sports Association (CGSSSA) Championship with outstanding results. They were first in Tap, third in Hip Hop and third overall. This Representative Dance squad has performed exceptionally well in all eisteddfods they have competed in. More students, including boys, have signed up for our program in Term 4 which will further strengthen our program.

Our junior and senior Netball teams have competed in the representative championships over the past two weeks at Penrith. Congratulations to all those students. Further to this three out of five teams competing in the Grand Finals won the Eastwood Ryde Netball Association (ERNA) Netball competition in their divisions. The 11 Team was involved in the finals and we congratulate all our students, coaches and staff for an outstanding Netball season.

Recently our SSC Athletics team competed in the CGSSSA Championships. Eight students have subsequently been selected in the CGSSSA team to compete in the Combined Catholic Colleges championship on 20 September. This is a fine achievement for our team and we wish all those students the best as they represent CGSSSA.

Each year, our Year 12 students benefit from our ‘magnificent, unique and beautiful tradition’ where they are supported by prayer companions – our Dominican sisters. At morning tea on Tuesday the Class of 2019 had an opportunity to thank the sisters for their prayers, support and wisdom throughout their final year of school and, in particular, as they face their final exams for the HSC and the IBDP.